Script
Jamie Oliver
At only 28, Jamie Oliver is now an extremely successful and well known chef, with his own acclaimed restaurant in the centre of London. He has made quite a few TV series, written four books, and still does a large number of live shows a year. He doesn’t have many free days any more. How did he make it big?
Well, his rise to fame and fortune came early and swiftly. By the age of eight he had already started cooking at his parents’ pub. It was an easy way to earn a little pocket money! After a couple of years in catering college, and a little time spent in France, he started working in restaurants. He worked under a few famous chefs in London, before he was spotted by a TV producer at 21, and his life changed.
Even though he had hardly any experience, he had a lot of enthusiasm for cooking, and was very natural in front of the camera. His first TV programme featured him zipping around London on his scooter buying ingredients and cooking for his friends, all to a rock and roll soundtrack. The recipes were bare and simple - they didn’t involve complicated cooking techniques and used lots of fresh ingredients and herbs. It attracted a completely new audience that previously didn’t have any interest in food programmes. Jamie Oliver became an overnight success.
So what’s his recipe for success? ‘A little bit of luck, a little bit of passion, and a little bit of knowledge!’ he says.

T 62
1 ‘How much money have you got in your pocket?’ ‘About twenty euros.’
2 ‘How many cups of coffee do you drink a day?’
'It depends. I have milky coffee for breakfast, sometimes another mid-morning, then maybe one or two, black, after lunch and dinner.’
3 'How many times have you been on a plane?’ ‘About five or six.'
4 'How much time do you spend watching TV?’
‘A couple of hours a night, just before I go to bed, I suppose.’
How much sugar do you have in your coffee?’ 'lust half a spoonful in white coffee, and none in black.’
How many pairs of jeans do you have?'
Three. A black pair, a blue pair, and an old pair I wear when I do dirty jobs like cleaning the car.’ ‘I low many books do you read in one year?’
' I honestly don’t know. Ten? Fifteen? I read most when I’m on holiday.’
'How much homework do you get a night?’
Too much! About two hours, maybe? It depends.'
How many English teachers have you had?’
'Er... let me see... about ten, I guess.’
How many films do you watch a month?’
One or two in the cinema, and one or two on television.'

T 63
1 There’s no need to rush. We’ve got masses of time.
2 She's got bags of money. I think she inherited it.
3 We've got heaps of food for the party. Don’t buy any more.
4 When my daughter comes back from university, she always brings piles of washing.
5 I can't see you today. I’ve got tons of things to do.
6 There were millions of people at the sales. I couldn’t be bothered to fight my way through them.

T 64 Six radio adverts
1 S = Sarah M = Mummy
Sarah is five, anil this is her favourite play shirt. It’s pink, with fluffy yellow ducks. Sarah loves her play shirt.
S It’s my favourite.
Ami she wears it to play in the garden.
S Look what I’ve found. Mummy!
And you wash it at low temperature. And she wears it to play in the garden.
S Mummy! Look what I’ve made!
And you wash it. And she wears it to play in the garden.
M Sarah! What on earth ... ?
And after a while, the din builds up, so the pink isn't quite as pink, and the yellow ducks aren’t as fluffy. New System Sudso Automatic can help. Its advanced formula can remove ground-in dirt even at low temperatures. So the pink stays very pink, and the fluffy yellow ducks are happy again. Wash ...
S Mummy! Look what I’ve made!
... after wash...
S Look what I’ve found. Mummy!
... after wash...
M Sarah! Don’t you dare bring that in here!
New System Sudso Automatic. It’s all you could want from a powder.
2 A ’Ere, Bill! lust... just watch this. Look! Look at that car trying to park!
B Ooh! You’re joking! Ooh-ooh! Now that just has to be a woman driver. It must be.
A It’s gotta be. ’Ere, do you want some help, love? Hey, look! Look at her now! Look! Look!
B I don’t believe it! She’s just whacked that GTI! Are you all right, darling?
A It’s a bloke.
B Bloke. Oh. It was a tight space, though, wannit, eh? [Oh, yeah. | Really.
A Yeah, that space, very tight space. Yeah.
B Complicated.
Since men are responsible for 81% of parking offences and 96% of dangerous driving offences, why should women have to pay the same for car insurance? At Swinton, we have access to policies with up to 20% reductions for women. For a competitive quote, contact your local branch, or Freefone Swinton on 0800 600 700.
С = Child D = Daddy
С Daddy! Daddy! Today I did a painting of you! And I got two stars! And Miss Lewis says I was the best in class!
D You’re a very naughty girl!
С Why daddy?
D Don’t argue with your father, young lady!
Now, go to your room ...! It’s no use crying about it. Go on! Go on! Get out!
Wednesday's UEFA Champion's League night. Manchester United - Bayern Munich.
7.30. ITV I. Do not disturb.
4 D = Daughter F = Father
D Well, Dad. I've decided which new car I’m getting.
F It’s all right for some. When I was your age ... D ... you counted yourself lucky to have a bike.
And that was second-hand.
F Now, well, that’s where you’re wrong, Miss Smarlypants. 1 was going to say that when 1 was twenty-two. I couldn’t even have afforded to insure a new car.
D Neither can I.
F Well, don’t expect me ...
D ... and I don’t have to. ’Cos all new Ford Escorts now come with one year’s free insurance, for anyone between 18 and 80. Which rules you out, anyway.
See your Thames Ford dealer now, as offer ends soon. Free insurance, subject to age and status.
F Just like your mother. Always have to have the last word.
D No I don’t.
5 Hi, this is Sue. Please leave a message.
Hi Sue. Met you last night. Just wondering if you -er want to meet up sometime. Erm, I’m going away soon, so maybe it could be soon. Er, don’t want to sound too keen. Not that I’m not keen, ’cos I am. Well, you know, within reason.
Anyway, maybe lunch, or maybe just a drink? Not that you shouldn’t do lunch, I mean you’re not, you're not fat -er, you’re not fat at all actually, you’ve got a great, -erm ... Not that that’s important, it, it’s personality that counts. Erm, anyway ...
Have a break. Have a Kit Kat.
6 P = Priest T = Tony
P Er-hem! Everyone! Welcome! We’re gathered here today, in the presence of others, to marry Tony and Helen. Helen, do you lake Tony to be your husband? Just nod. Tony, do you take her? T Iw...
P Lovely rings. Oop! Leave it! Leave it! Kiss! Lovely. Husband and wife. Wife, husband. Right. You’re married. Jolly good. I’m outa here. Come to IKEA after work. Bur don’t rush! We're open till 10 p.m. weeknights.

T 66
Scotland imports a lot of its food from other countries. Its exports include oil, beef, and whisky. I’m very pleased with my English. I’m making a lot of progress.
Ministers are worried. There has been an increase in the number of unemployed.
But the number of crimes has decreased, so that’s good news.
How dare you call me a liar and a cheat! What an insult!
There was a demonstration yesterday. People were protesting about blood sports.
7 He ran lOOm in 9.75 seconds and broke the world record.
8 Don't touch the DVD player! I’m recording a film.
9 Britain produces about 50% of its own oil. 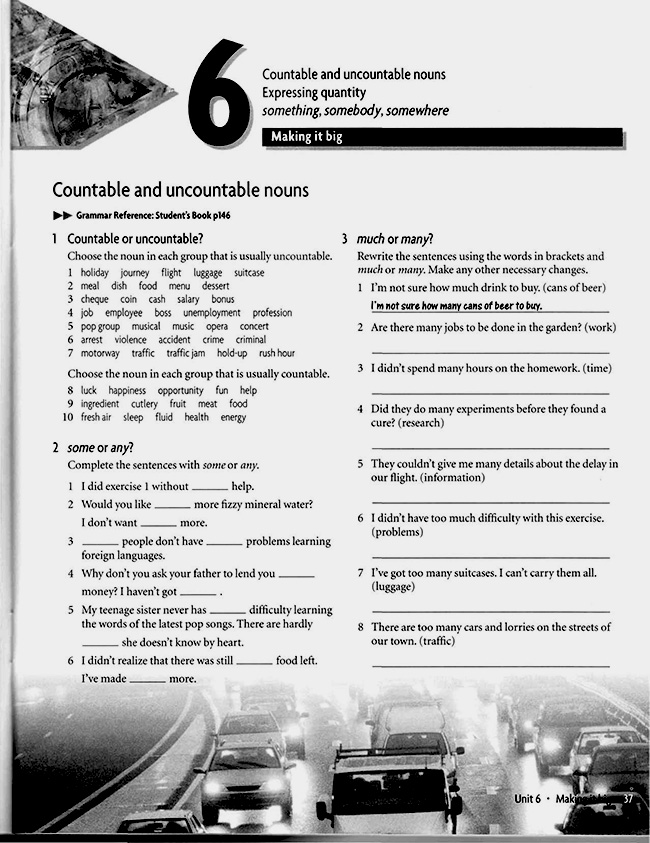 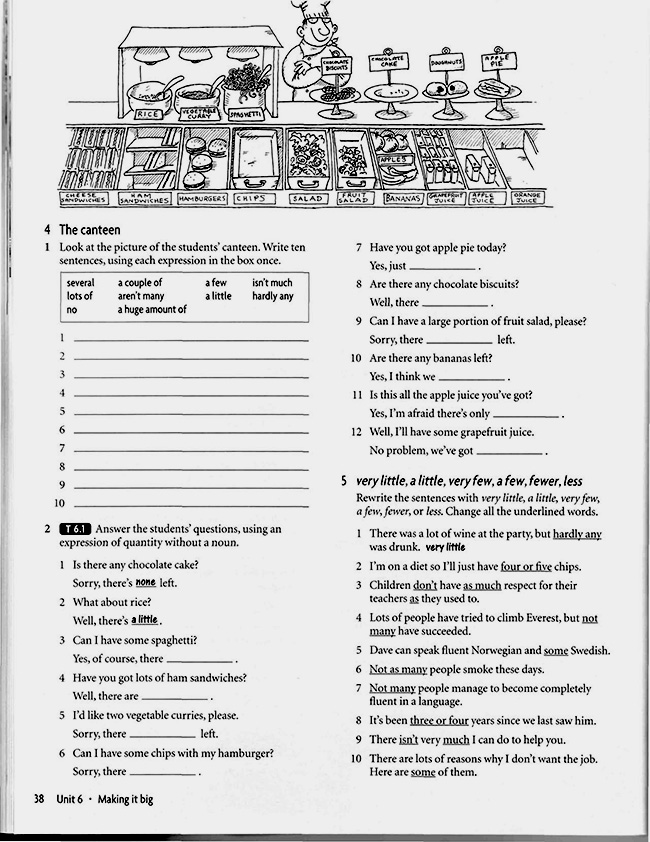 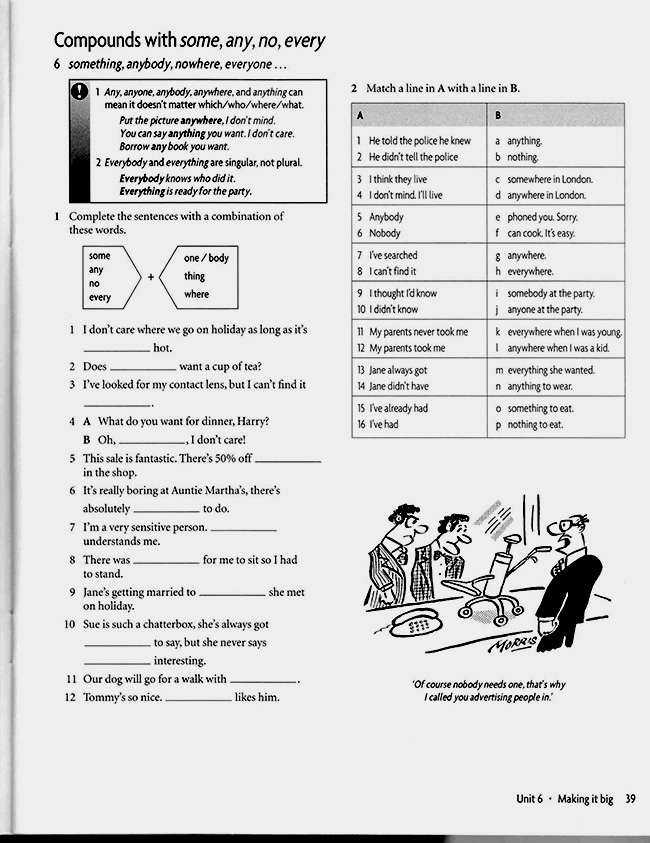 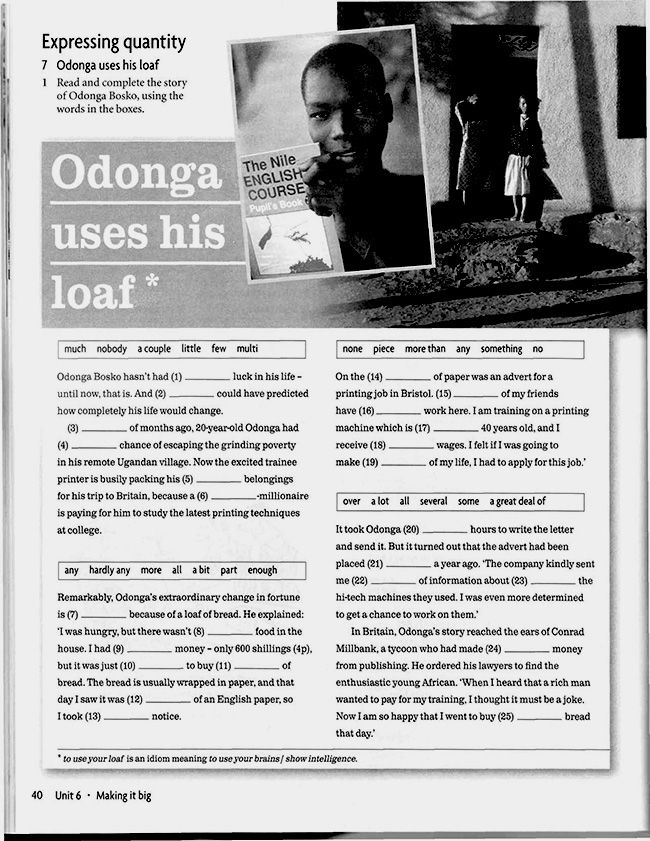 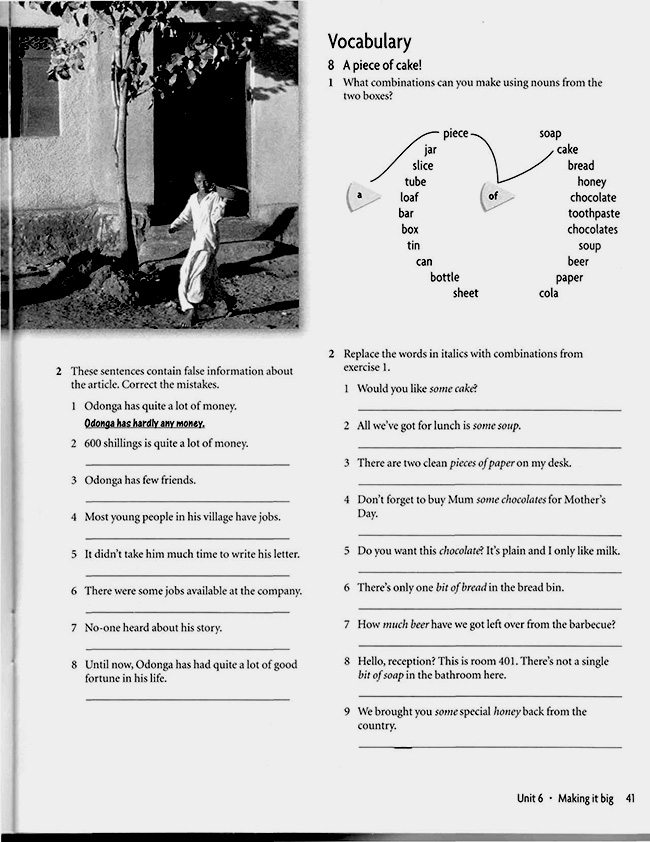 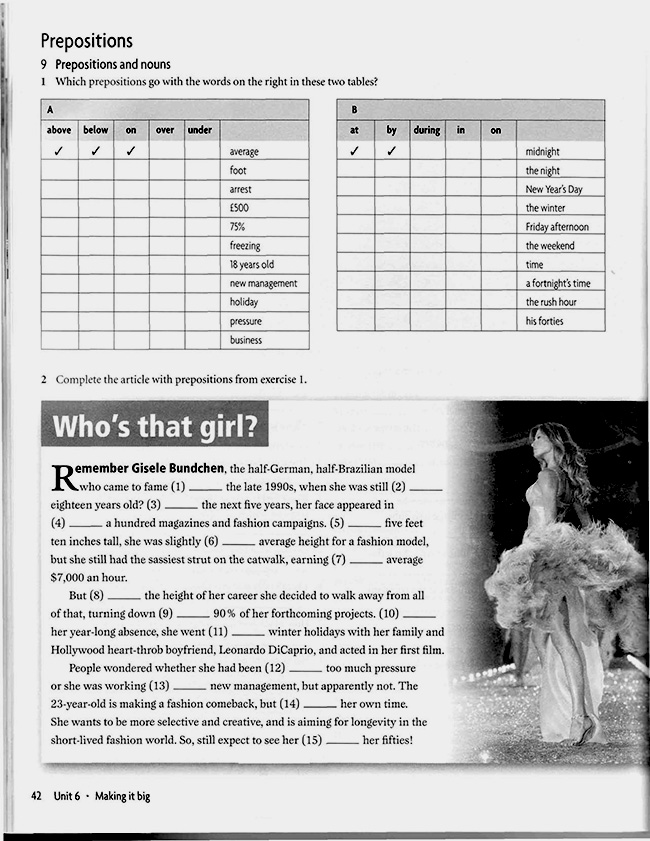 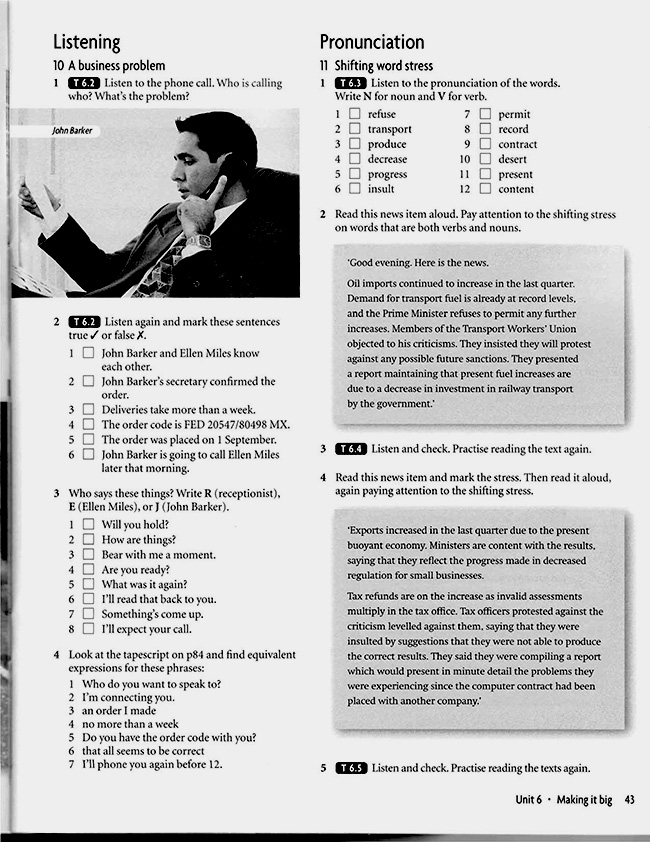 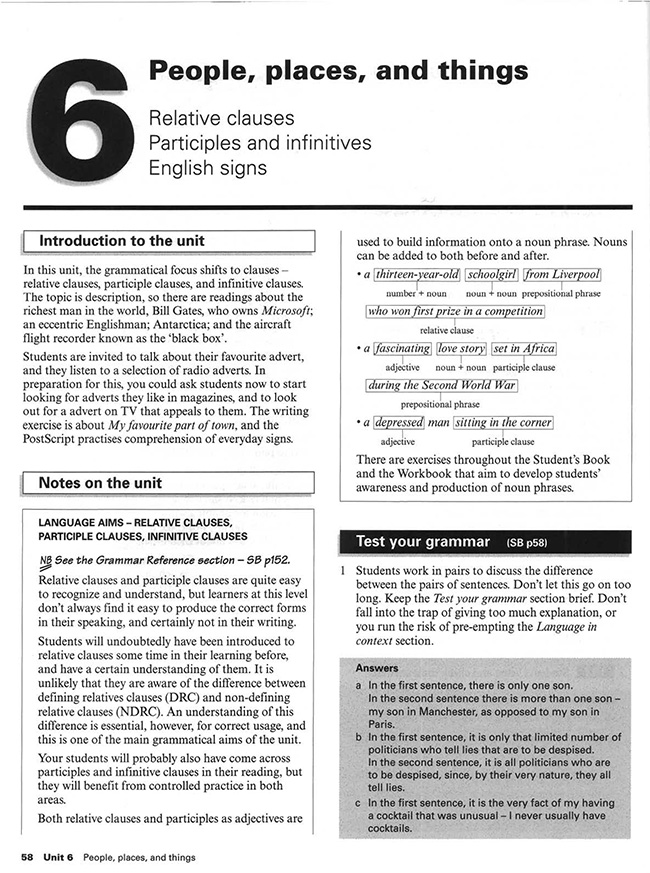 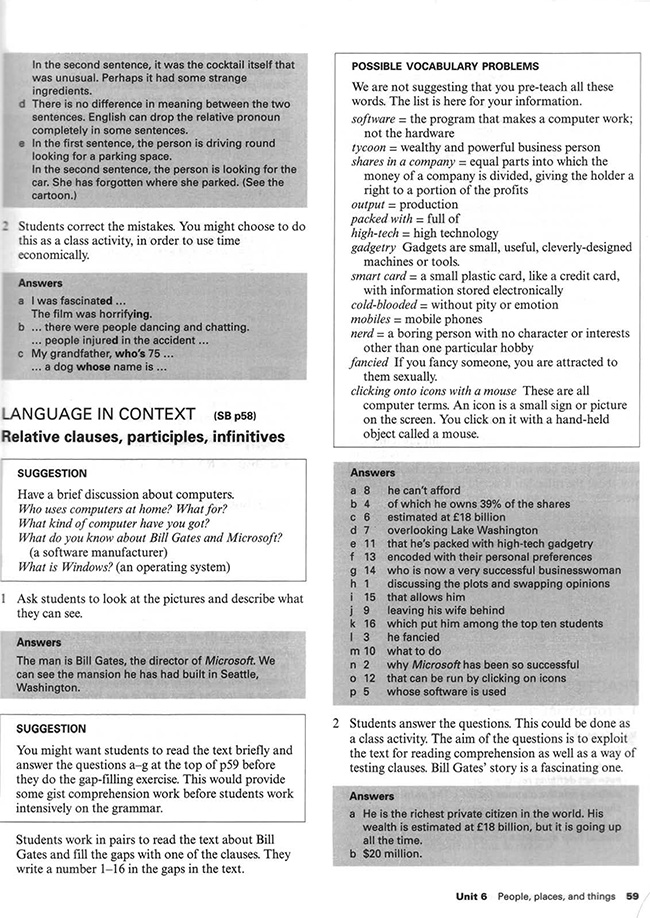 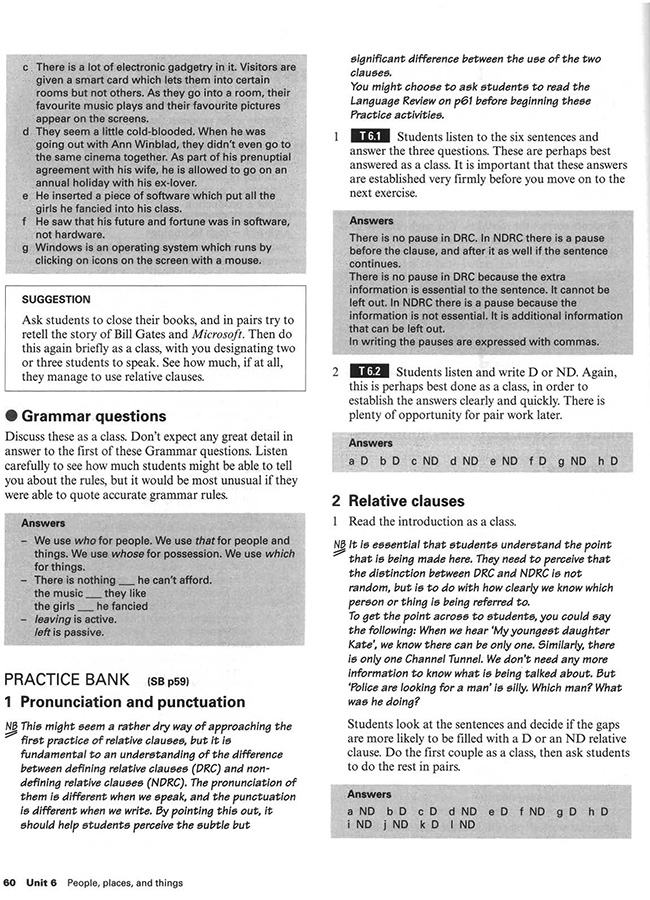 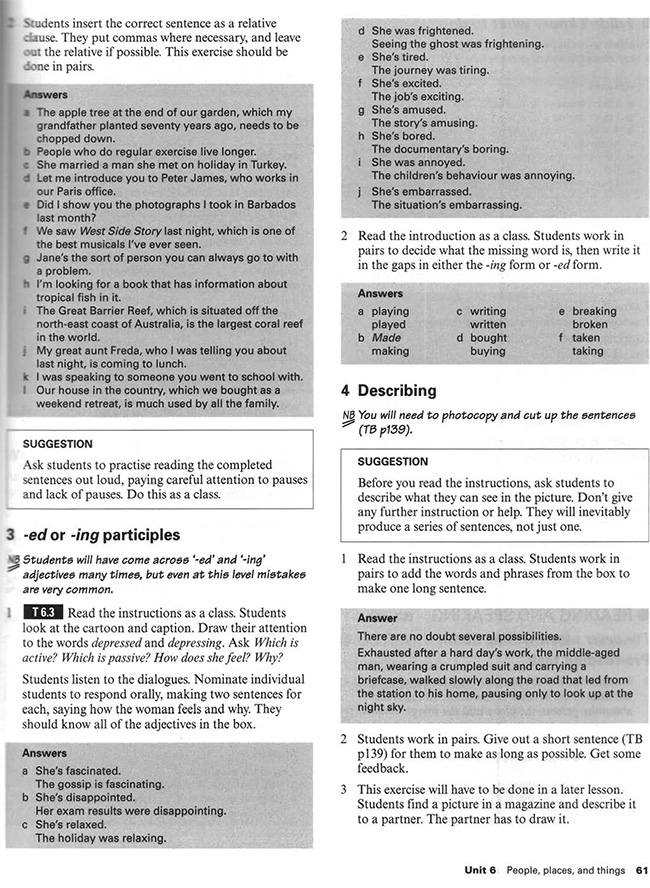 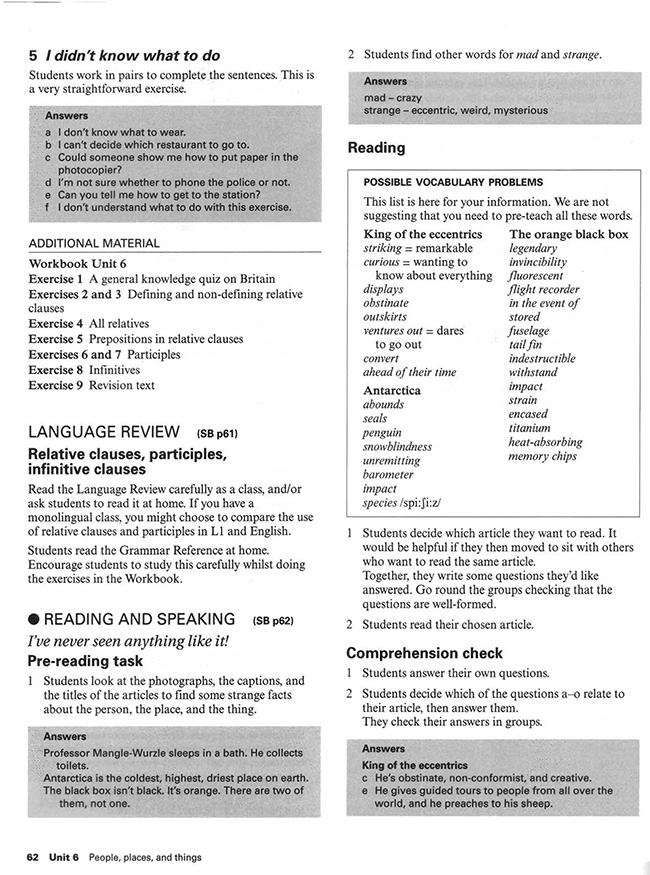 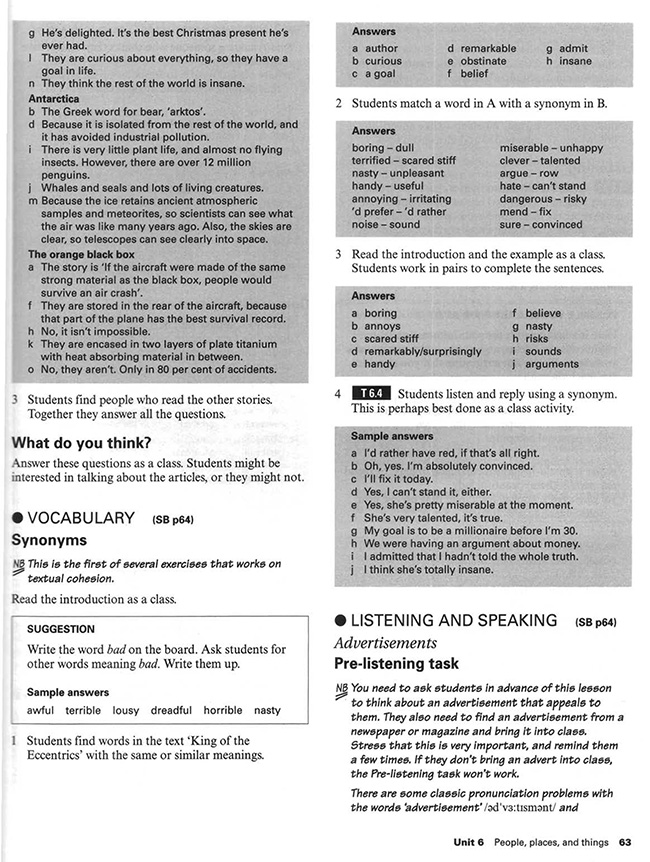 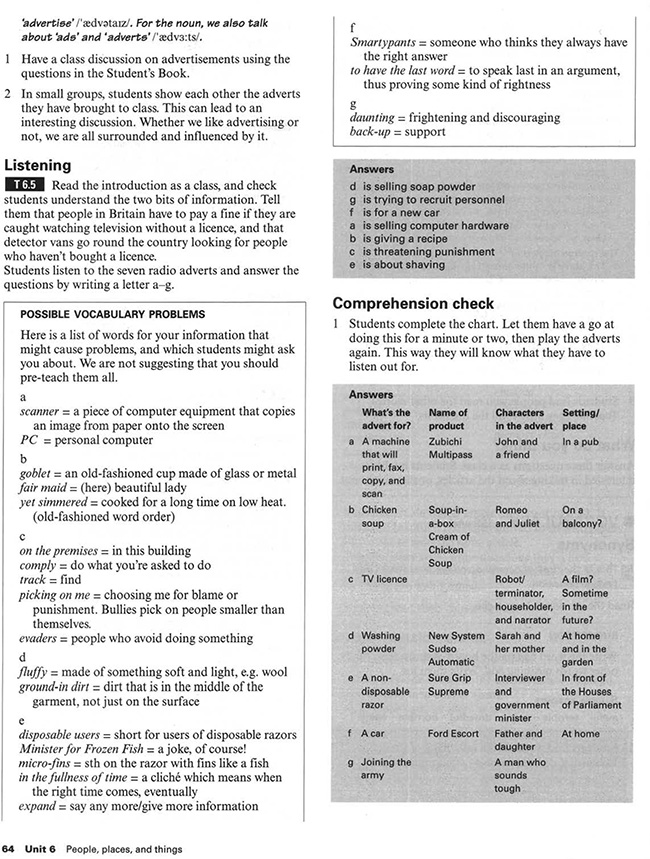 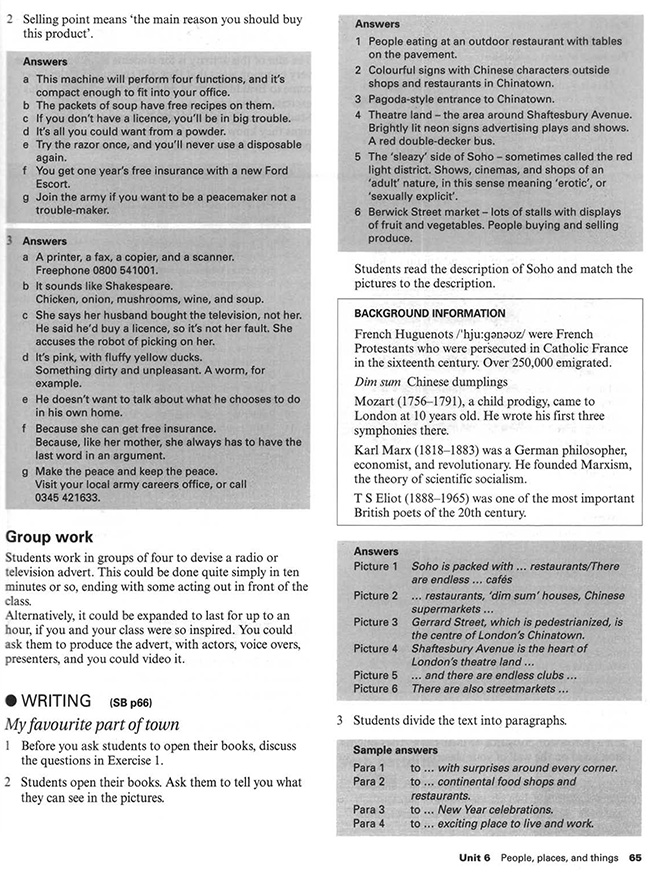 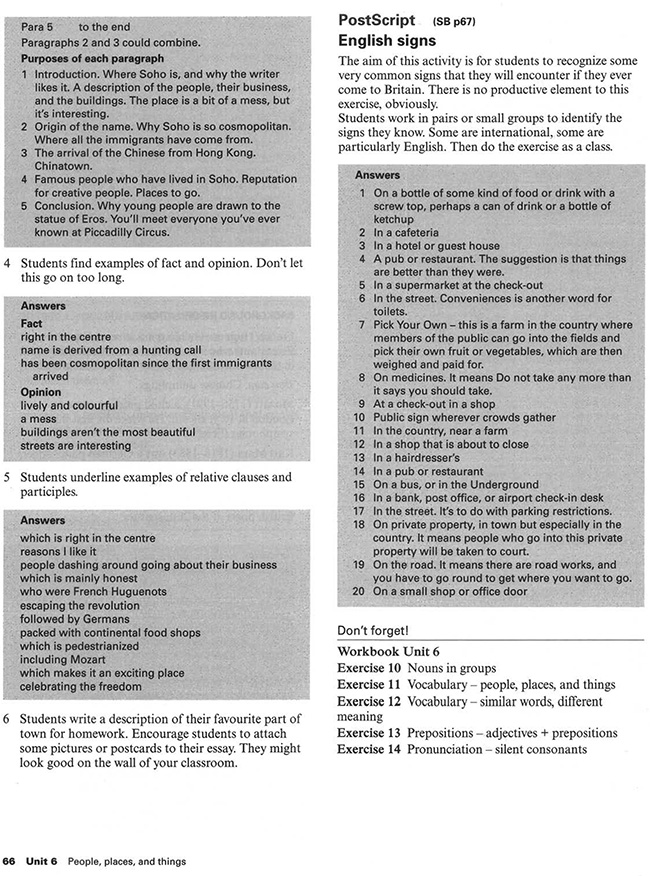