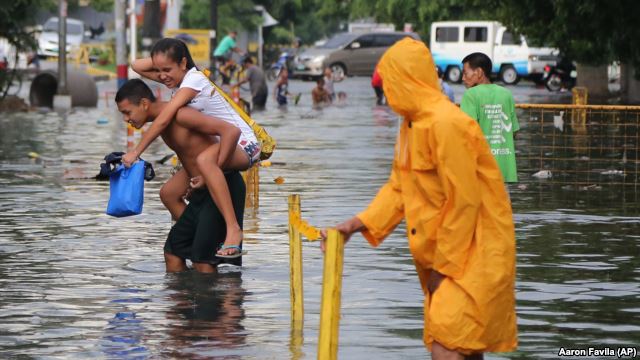 Health and medical experts gathered in Washington this week for talks on climate change and public health. They met at the White House. The meeting was held a day after the U.S. Environmental Protection Agency released a report on climate change. The report explores the health and economic reasons for lowering climate changing emissions.

The findings are similar to those of an independent research group, the Lancet Commission on Health and Climate.
The Lancet Commission report says the effects of climate change could threaten the past 50 years of gains in public health. Commission project leader Nicolas Watts says the changes in Earth’s climate have led to weather extremes. The extremes can create public health risks that he considers very dangerous and unacceptable.

Mr. Watts says the changes have led to less rainfall, and this has been linked to a drop in agricultural productivity. The reduced productivity has led, in turn, to an increase in malnutrition, especially among children.

Studies have linked climate change to an increased likelihood of flooding in some areas. Mr. Watts says floods are linked to a rise in the rates of infectious diseases, cholera and problems that result from a breakdown of waste treatment systems. He also notes that the world is getting hotter. In 2003, 70,000 people in Europe died because of higher than normal temperatures.

"And those sorts of events are expected to increase in frequency and severity as time goes on." Nicholas Watts spoke to VOA on Skype.
The World Health Organization has warned that serious action is required to reduce global warming emissions. If the reduction does not happen, the WHO says, there will be serious results. By 2030, almost 250,000 people will die every year from the effects of global warming.

But the Lancet Commission report also describes growing evidence of the effects of actions to slow climate change. It says that such actions are good for global health. Outdoor air pollution is linked to almost three million deaths worldwide. About 1.2 million of those deaths are in China alone. Mr. Watts says a move from coal-fueled power plants to renewable energy, such as sunlight and wind power, can greatly reduce that danger.


He also says that moving to renewable energy will lead to fewer people being treated in hospitals and a drop in health care costs. He says this will, in turn, help struggling health budgets. Suggesting that people use active forms of transportation like bicycles may help reduce diabetes and obesity, he adds.

The Lancet Commission suggests several ways to deal with climate change. They include closing coal power plants, increasing the use of renewable energy, investing in health systems and agreeing to support a global climate treaty. World leaders are expected to meet in Paris in December to sign that measure. Mr. Watts says that politics and complex issues will be debated. But no matter what, he says, the treaty is about public health.

"When you start to do that you realize that actually the responses to climate change aren't things that are necessarily hurt and they are not necessarily things that are going to result in a lower quality of life. In fact, most of what you want to do to respond to climate change is good for public health and it is actually a much brighter future."

Mr. Watts hopes the Commission's report helps unite health care experts behind a global treaty. He hopes that the treaty can respond to the risks of climate change. "What is good for the planet," he adds, "is good for patient care."

What has led to less rainfall?
What does Mr. Watts say about a rise in the rates of infectious?
How is climate change affecting your country?
Is renewable energy popular in your country?