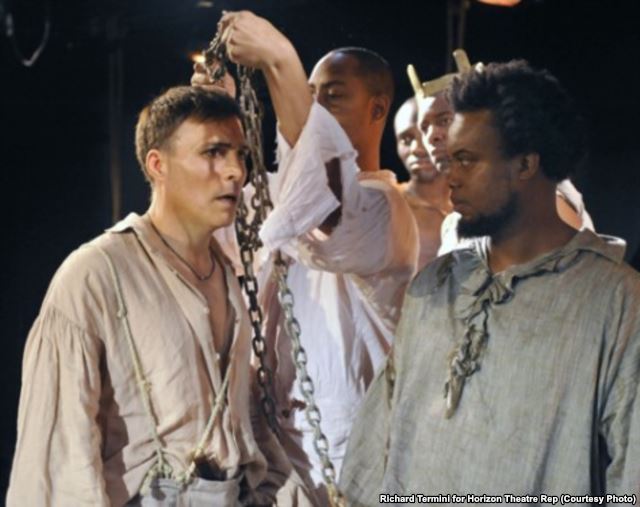 Words in This Story

collapse - v. to fall down or become unconscious because you are sick or exhausted

señor - n. a title or form of address used of or to a Spanish-speaking man, corresponding to Mr.or sir.

recover - v. to become healthy after an illness or injury : to return to normal health

scurvy - n. a disease that is caused by not eating enough fruits or vegetables that contain vitamin C

survive - v. to remain alive; to continue to live

equipment - n. supplies or tools needed for a special purpose

temporary - adj. continuing for a limited amount of time : not permanent

faker - n. a person pretending to be something they are not

Today, we continue the story "Benito Cereno." It was written by Herman Melville.

Last week, we told how African slaves on a Spanish ship rebelled in seventeen ninety-nine. They killed most of the Spanish sailors. Only the captain, Benito Cereno, and a few others were left alive.

The leader of the rebellion was a slave named Babo. He ordered Captain Cereno to sail the ship back to Senegal, the slaves' homeland. But food and water were low. So the ship stopped at an island off the coast of Chile to get the needed supplies.

When it arrived, an American ship was in the harbor. The American captain, Amoso Delano, thought the Spanish ship might be in trouble. He would offer help.

Babo decided to remain close to Captain Cereno and act as if he were the captain's slave. Babo would kill him if he told Captain Delano the truth about what happened.

Now, here is Shep O'Neal to continue our story.

As Captain Delano came up in his whale boat, he saw that the other ship needed scraping, tarring and brushing. It looked old and decayed. He climbed up the side and came aboard. He was quickly surrounded by a crowd of black men. Captain Delano looked around for the man who commanded the ship. The Spanish captain stood a little away off against the main mast.

He was young looking, richly dressed but seemed troubled and tired with the spirit gone out of him. He looked unhappily toward his American visitor. At the Spanish's captain side stood a small black man with a rough face.

Captain Delano struggled forward through the crowd, went up to the Spaniard and greeted him. He offered to help him in any way he could. Captain Benito Cereno returned the American's greeting politely, but without warmth. Captain Delano pushed his way back through the crowd to the gangway. He told his men to go and bring back as much water as they could, also bread, pumpkins, sugar and a dozen of his private bottles of cider. The whale boat pushed off.

Left alone, Captain Delano again observed with fresh surprise the general disorder aboard the ship. Some of the men were fighting. There were no deck officers to discipline or control the violent ones. And everyone seemed to do as he pleased. Captain Delano could not fully understand how this could have happened. What could explain such a break down of order and responsibility? He asked Don Benito to give him the full story of his ship's misfortunes. Don Benito did not answer. He just kept looking at his American visitor as if he heard nothing.

This angered Captain Delano, who suddenly turned away and walked forward to one of the Spanish seamen for his answer. But he had hardly gone five steps when Don Benito called him back. "It is now a hundred and ninety days," Don Benito began, "that the ship sailed from Buenos Aires for Lima with a general cargo. Pedigree, tea, and the like, and a number of Negros, now not more than a hundred and fifty as you see, but then numbering over three hundred souls.

The ship was officered and well-manned, with several cabin passengers. Some fifty Spaniards in all.

Off Cape Horn we had heavy gales." Captain Cereno coughed suddenly and almost collapsed. He fell heavily against his body servant. "His mind wanders," said Babo. "He was thinking of the disease that followed the gales. My poor, poor master. Be patient señor, these attacks do not last long. Master will soon be himself."

Don Benito recovered, and in a broken voice continued his story. "My ship was tossed about many days in storms off Cape Horn. And then there was an outbreak of scurvy. The disease carried off many whites and blacks. Most of my surviving seaman had become so sick that they could not handle the sails well. For days and nights we could not control the ship. It was blown north-westward. The wind suddenly left us in unknown waters with oppressive hot calms. Most of our water was gone.

And we suffered terribly, especially after a deadly fever broke out among us. Whole families of blacks and many Spaniards, including every officer but myself, were killed by the disease."

Don Benito paused. He looked down at the black man at his side. Babo seemed satisfied. The Spanish captain saw him take his hand from the knife hidden under his shirt.

Captain Delano saw nothing. His mind was filled with the terrible tale he had just heard. Now he could understand why the other captain seemed so shaken. He took Don Benito's hand and promised to give him all the help possible. He would give him a large permanent supply of water, and some sails and equipment for sailing the ship.

And he also promised to let Don Benito have three of his best seamen for temporary deck officers. In this way, the San Dominick could without delay start for Concepcion. There the ship could be fixed and prepared for its voyage to Lima.

Captain Delano decided to talk of other matters. But the Spanish captain showed no further interest. He answered Captain Delano's questions with sharp words and suddenly with an angry movement he walked back to Babo.

Captain Delano watched the two men whispering together in low voices. It made an ugly picture, which Captain Delano found so extremely unpleasant that he turned his face to the other side of the ship. Their actions made Delano suspicious of Captain Cereno. He began to wonder about him. His behavior. His coughing attacks. His weakness. His empty wild looks. Was he really half mad or a faker playing a part? One moment Captain Delano had the worst suspicions of Don Benito. But the next he would feel guilty and ashamed of himself for having such doubts about the man.

Presently, Don Benito moved back toward his guest, still supported by his servant. His pale face twitched. He seemed more nervous than usual. And there was a strange tone in his husky whisper as he spoke. "May I ask how many men you have on board, señor?" Captain Delano became uneasy, but answered. "About twenty-five all total." "And at present, señor, all on board?" "All on board," Captain Delano answered. "And will be tonight, señor?"

At this last question, Captain Delano looked very seriously at Don Benito, who could not return the look but dropped his eyes to the deck. Captain Delano could think of only one reason for such a question. But no, it was foolish to think that these weak and starving men could have any idea of seizing his ship. But still he remained silent. "And will they be aboard tonight?" Again the question from Don Benito. Captain Delano decided to answer truthfully. Some of his men had talked of going off on a fishing party about midnight. And he told Don Benito this.

As he answered, Captain Delano again looked straight at Don Benito. But the Spanish captain refused to meet his eyes. Then as before, he suddenly withdrew with his servant. And again the two men began whispering to each other in low voices. Captain Delano tried to push the worry from his mind. But what were those two strange men discussing? That will be our story next week.