Why Are Dads Staying Home to Raise the Kids 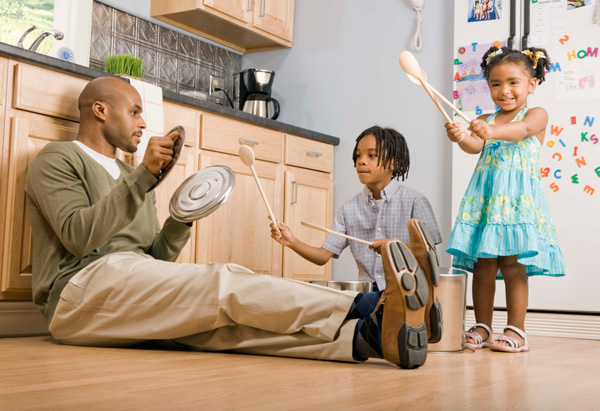 laid it on the line idiomatic expression : to make something very clear; to bevery definite about something

masculine – adj.having qualities appropriate to or usually associated with aman : masculinity is the noun

anxious – adj.afraid or nervous especially about what may happen : feelinganxiety

volunteer – n. a person who does work without getting paid to do it:volunteer is also a verb

extracurricular – adj.used to describe extra activities (such as sports) thatcan be done by the students in a school but that are not part of the regularschedule of classes 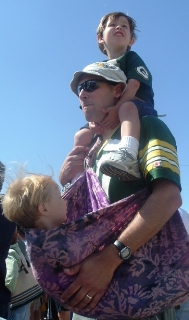 It’s four o’clock on a Wednesday at a private swimming pool in the Washington, D.C. area.
Two fathers talk about getting their kids ready for a baseball-themed birthday party that evening. Both fathers are trying to get their sons dried, dressed and ready to get in the car.

When I ask one of the fathers if is he is a stay-at-home dad, he quickly answers, “no.” But, then he adds that he did lose his job six weeks ago. He says he is temporarily a stay-at-home Dad.
The other father, RJ Respress, has been a stay-at-home dad for the past 10 years. He has a 10-year-old son named Ben and a 7-year-old daughter named Sophie.

Being a stay-at-home dad now, he says, is much different than it was 10 years ago.
“… and so when I first started staying home, there weren’t a lot of dads around. It wasn’t a thing yet. And being home as a dad at that point you definitely stood out. I stood out. But now, I don’t think it makes a lot of difference, honestly. The stay-at-home dad phenomenon, if you will, I think, everyone seems to know about it. It’s not peculiar. You see them all the time.”

He is right.
Families in the U.S. are changing.
A new study finds that in the U.S. more than two million fathers are staying home to take care of the house and family. This number is twice that of 25 years ago. In 2012, 16 percent of all parents in the U.S. were stay-at-home dads.

Gretchen Livingston is with the Pew Research Center. She says the number of stay-at-home dads is only going to grow.
She says in the last 25 years there have been changes as far as dads taking on more caregiving responsibilities and mothers taking on more bread-winner responsibilities. She adds that the number of hours a day that dads spend caring for their kids has tripled in the past decades. That is a huge change.

The study finds that disability, sickness and unemployment are among the reasons that fathers stay home. But, some fathers do so simply to spend more time with their children.

Like RJ, Blake Humphreys has also been a stay-at-home dad for the past ten years. Blake and his partner have two kids – a 10-year-old son named Aiden and a nine-year-old daughter named Camille.

Blake is a big, muscular man. He is well over six feet tall, with a beard and long hair tucked under his baseball cap. He looks like the kind of man that would be hard to frighten. But he says he does feel fearful when he counts the years he has been out of the workforce.

Blake became a stay-at-home parent for the same reason many women do – he made less money than his partner.

He thought it would be easy. Then he got advice from an expert on the subject – the woman who raised his partner.
She was a stay-at-home mom in the 1970s. She raised three kids until they left for college. Blake says she also turned her stay-at-home situation into a career. She did philanthropic work and served on several boards in her community.

When asked about the most difficult part of being a stay-at-home dad, RJ and Blake give the same answer – feeling alone, or isolated.

Both dads say they miss the interactions with co-workers at their former jobs. RJ worked at an investment bank. And Blake worked at a non-profit organization supporting gay rights.

“Being a stay-at-home dad was a lot harder than what I, what I had in my mind would be like.

“Why”
“It became kind of isolating and you just have to know how to manage that.”

In the U.S., there are many places for moms to meet. There are breastfeeding classes and other mothers’ groups that teach everything from music to yoga. Moms are likely to reach out to other moms. Not so with the fathers.

For one, there just aren’t as many stay-at-home dads as stay-at-home moms. And, Blake Humphreys says stay at home mothers seem more willing to make friends with other women in their position.

I just remember when the kids were young and going to the playground. I mean, it be would cliques. And you would feel left out. All the nannies would be together, all the stay-at-home moms would be together. And you’d see the guys on the outskirts looking in. And so, that took some getting used to and some skills to figure out how to manage that social situation.”

“So, it was really funny walking into these shows. The dads would sit on one side of the room and the moms would sit on the other side. It was like a junior high school dance. I thought it was so odd. Why aren’t the men talking to the women?”
Even though the number of stay-at-home fathers is growing in the U.S., such men can still face worries about their self-worth. RJ and Blake both shared their feelings of anxiety.

RJ says, in the beginning, the question “What do you do for a living?” made him especially uneasy.
“But back when I started and I would tell people I was a stay-at-home parent, there was a lot of anxiety because there’s that initial shock from the person receiving that information. Say you’re at a party and they say,

“What do you do?” – (be)cause that’s always the first question around here – “what do you do?” And to say, “I’m a stay-at-home dad.’ You may project that in your conversation and say, ‘Oh, that person is judging me. And that’s hard.”

Blake volunteers at his children’s school partly, he says, to battle that isolation and to build up his sense of self-worth. Volunteering became like a part-time job. He says it adds value to his life and his family’s life.

”I think because of being a stay-at-home dad I would almost be overly involved. I would try to turn into a part-time job doing volunteer work because I would see value … that it added value to not only my life to but it added value to my kids’ school life.”
RJ Respress feels the same way. He volunteers at his children’s school, coaches his son’s baseball team and organizes all after-school activities. RJ has recently begun a part-time paying job from home.

But he says his job as stay-at-home dad comes first.
“I do work. And I work -- not full time – but I work from home and I’m able to work part-time and that allows my family the ability to coordinate with the kids activities.”

Stay-at-home dads may question their self-worth because they are not bringing money into the family directly, a role traditionally connected to fathers. Blake says he began to question his masculinity.

“And school is letting out …”
Going back to work is also a question of economics for Blake and his family. If he goes back to work, they will have to pay someone to pick up their kids from school, to drive them to sports and other activities, and to babysit when both parents are at work.

And, just spending time with their children is valuable to both men.
In fact, when RJ told his former co-workers that he would be taking time off from work to look after his newborn son, the reaction was not what he expected.

“When I went and told the people that I was working for -- I worked for an investment bank at the time -- and I went and told them almost all of them -- they were older than me, their kids were older -- they all expressed a feeling of, ‘I wish I could’ve done that.’ They never really saw their kids very much. Most of the older guys saying, ‘Really enjoy that time because you don’t get that time back.’ And that’s huge. Hold on one second … ”

Anna Matteo wrote this report for VOA Learning English and Caty Weaver edited the story.
Words in This Story