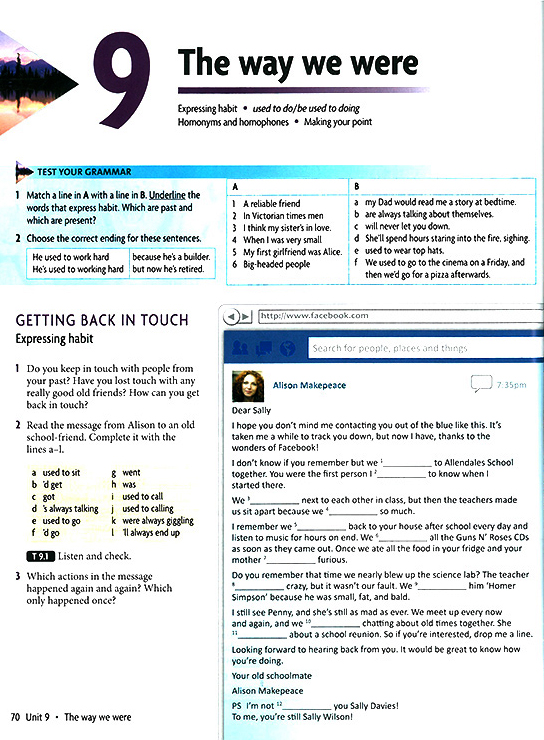 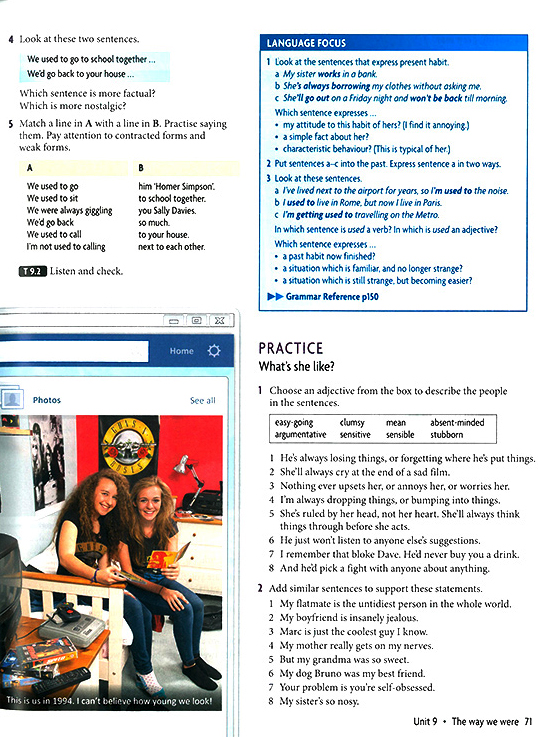 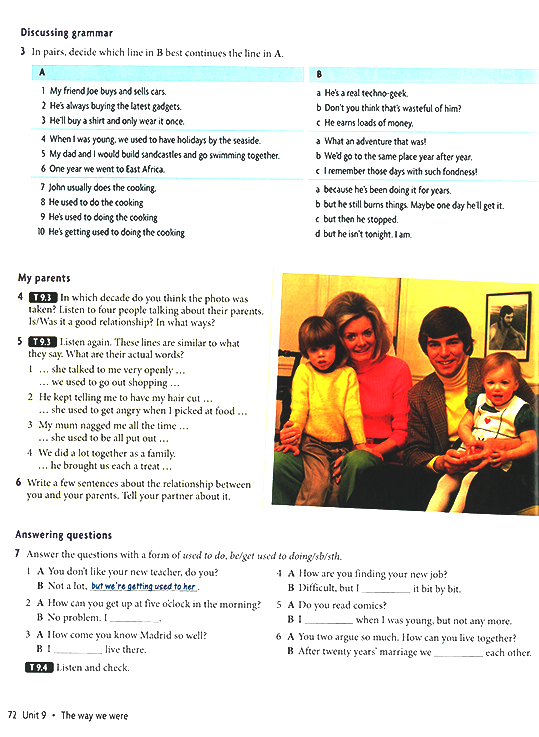 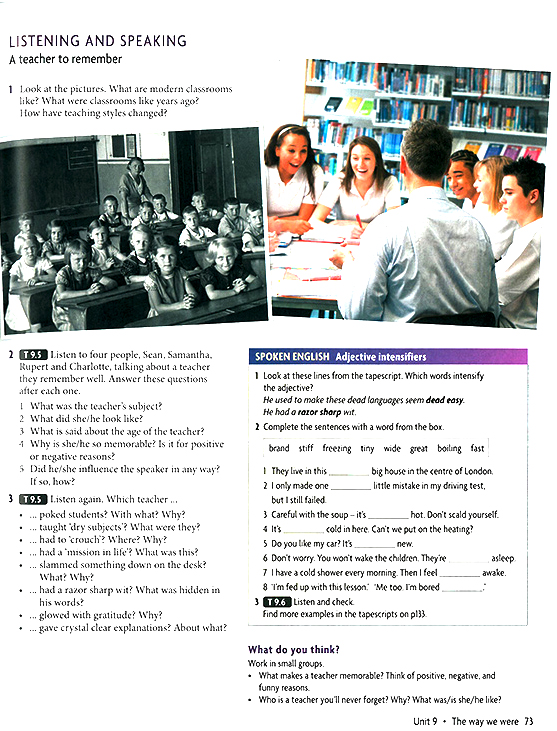 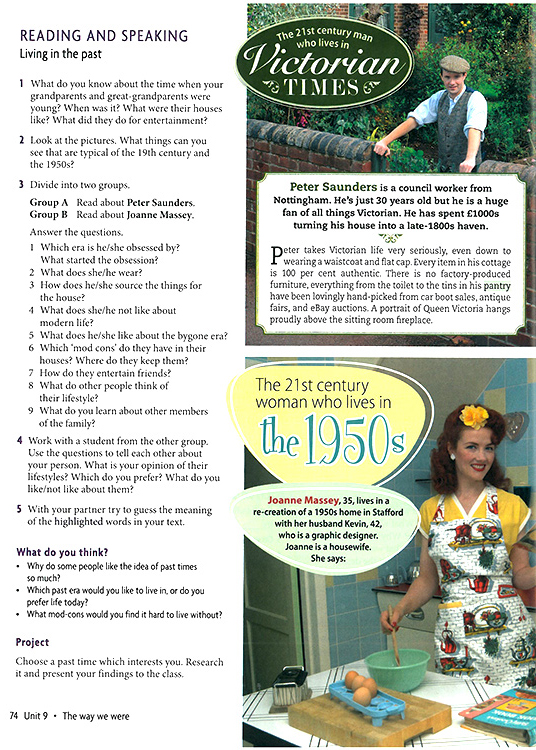 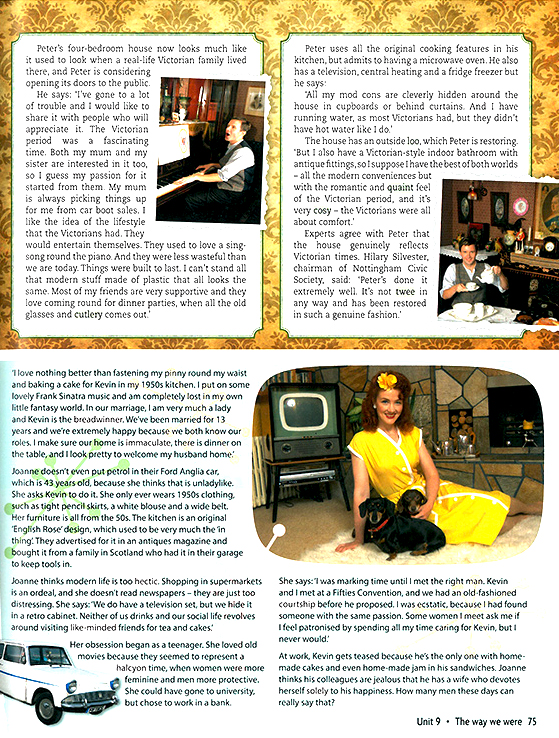 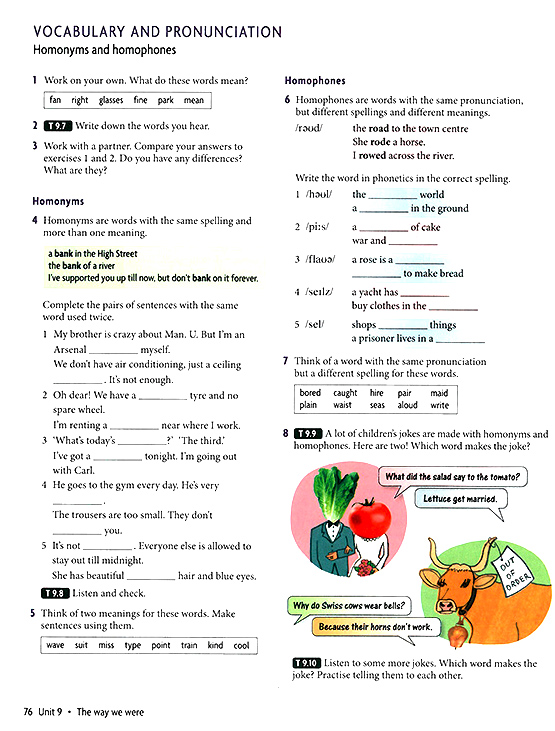 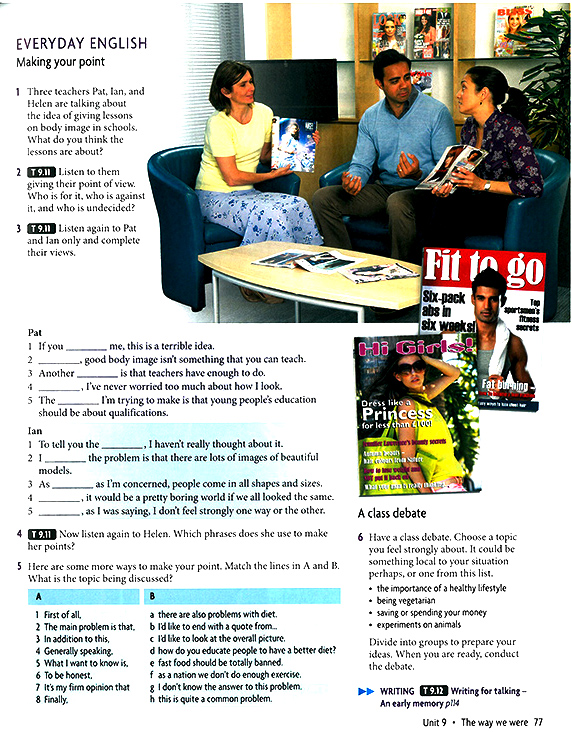 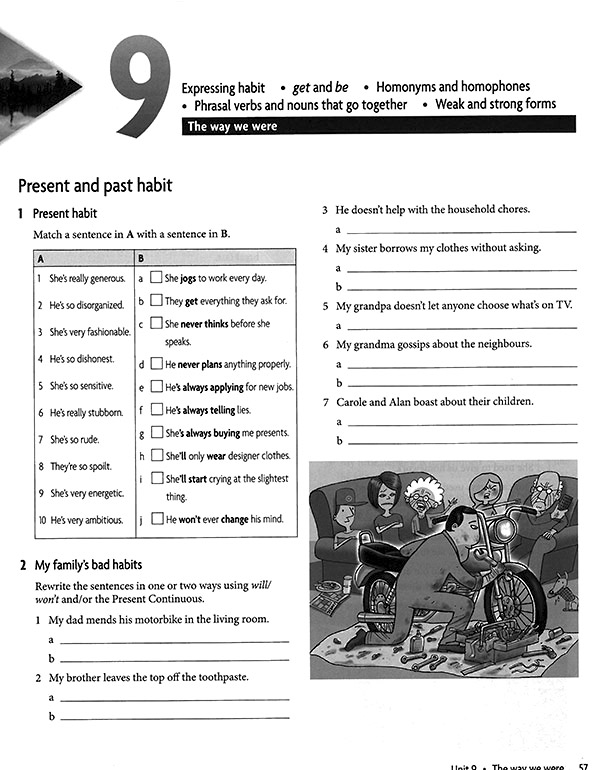 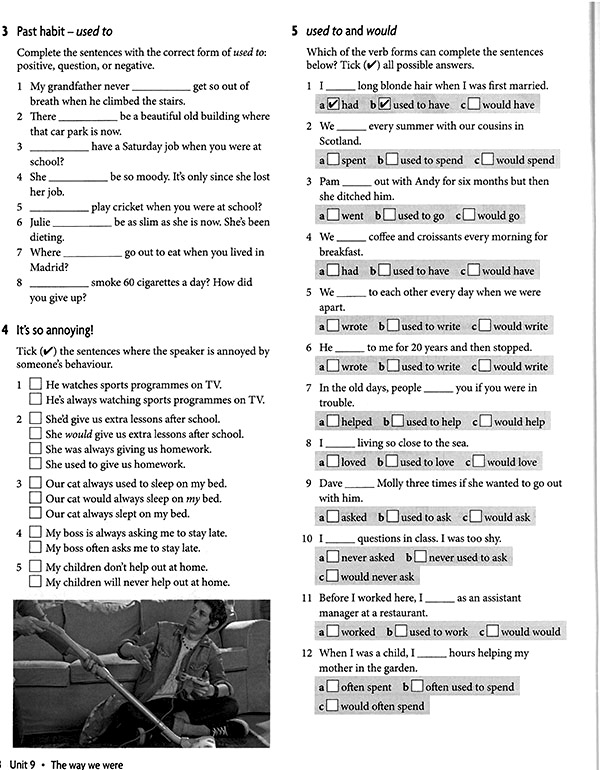 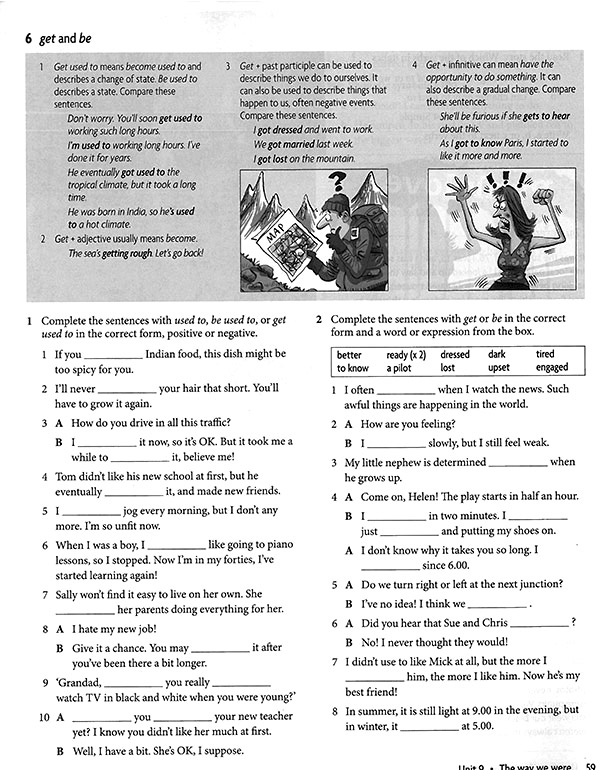 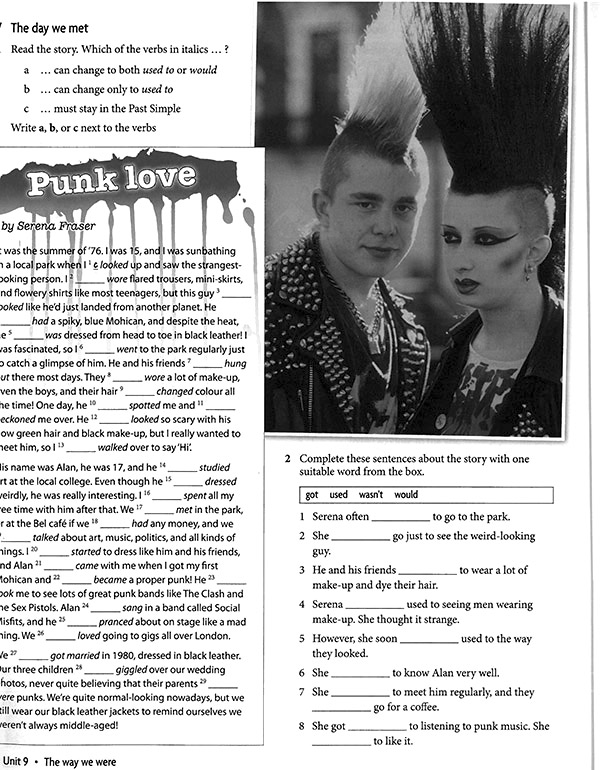 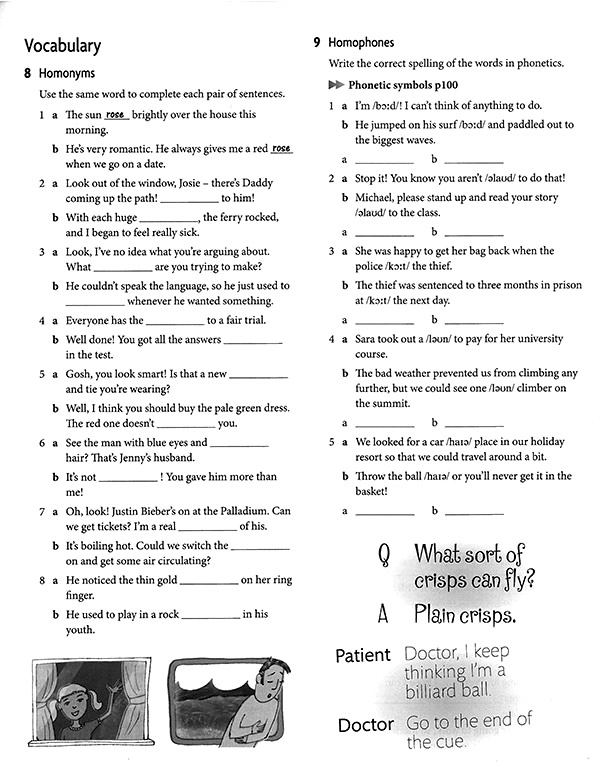 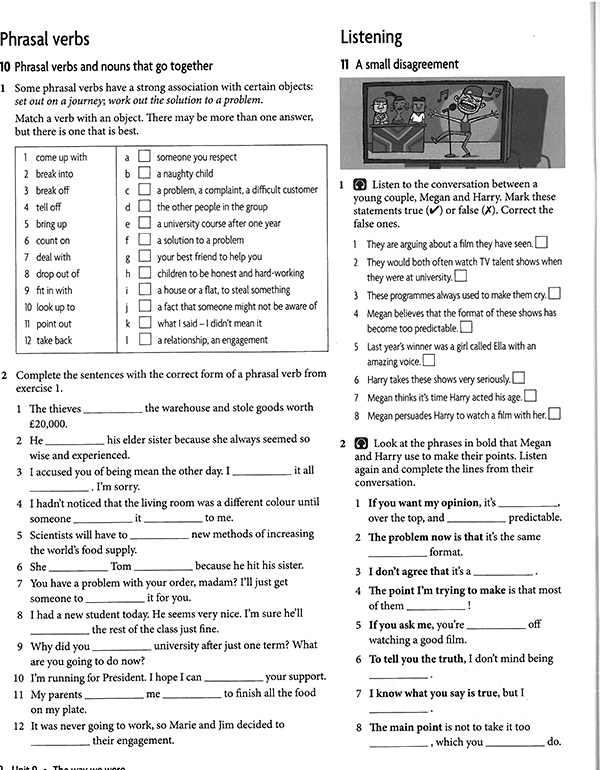 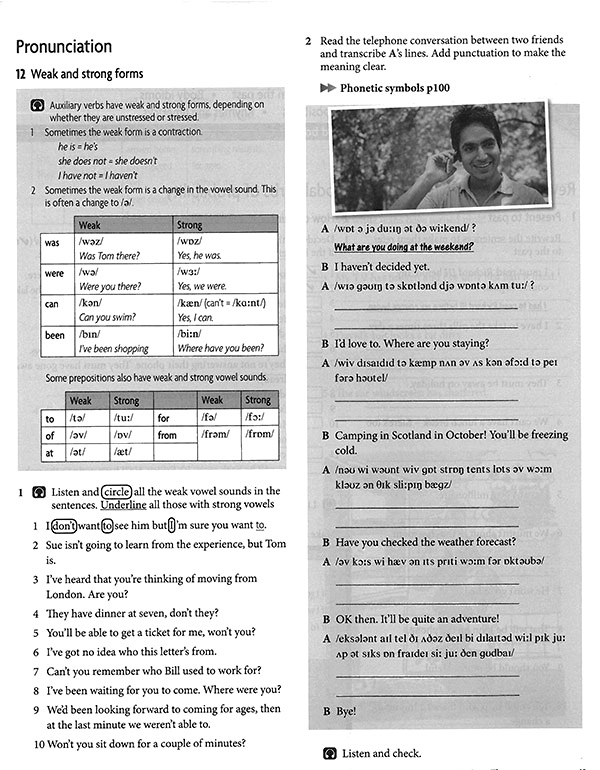 UNIT 9
An email to a friend
Dear Sally,
I hope you don’t mind me contacting you out of the blue like this. It’s taken me a while to track you down, but now I have, thanks to the wonders of Facebook!
I don’t know if you remember but we used to go to Allendales School together. You were the first person I got to know when I started there.
We used to sit next to each other in class, but then the teachers made us sit apart because we were always giggling so much.
I remember we’d go back to your house after school every day and listen to music for hours on end. We’d get all the Guns N’ Roses CDs as soon as they came out. Once we ate all the food in your fridge and your mother was furious.
Do you remember that time we nearly blew up the science lab?
The teacher went crazy, but it wasn’t our fault. We used to call him ‘Homer Simpson’ because he was small, fat, and bald.
I still see Penny, and she’s still as mad as ever. We meet up every now and again, and we’ll always end up chatting about old times together. She’s always talking about a school reunion.
So if you’re interested, drop me a line.
Looking forward to hearing back from you. It would be great to know how you’re doing.
Your old schoolmate
Alison Makepeace

PS I’m not used to calling you Sally Davies! To me, you’re still Sally Wilson!

T. 9.2
we used to go to school together
we used to sit next to each other
we were always giggling so much
we’d go back to your house
we used to call him ‘Homer Simpson’
I’m not used to calling you Sally Davies

1 I got on very well with my mother. She was my best friend, still is. We had to get on, really. Dad left when I was three. I used to tell her everything, well, nearly everything. And she’d talk to me very openly, too. Sometimes she’d say to me ‘Don’t go to school today. Stay with me.’ And we’d go out shopping or, or something like that. It’s a wonder I had any education at all, the number of days I missed from school.

2 It was my dad who used to drive me mad. He was always telling me to have my hair cut and dress more smartly. My mum was much more lenient. She never really minded how I dressed. But she would get angry when I picked at food before she’d put it on the table. ‘Get your hands off!’ she’d say. But I was always so hungry. I had such a big appetite for such a small, weedy child - then at 16 I suddenly shot up - I’m 6ft 5” now!

3 My mum was always nagging me, telling me to get off the computer, turn off the TV, pick up my things, do my homework. She’d keep on and on and then she’d be all put out when I’d shut myself away in my room. I just needed some peace and quiet each day. She just didn’t realise how hard it was for me at school, I wasn’t very popular, you see - so I would really need some time out when I got home.

4 I have very fond memories of my childhood.
To me it represented security. We used to do a lot together as a family. I remember walks, and picnics, and going for car rides on a Sunday afternoon. Every Friday when my Dad came home, he’d bring us each a treat, just something little. My mother used to say he was spoiling us, but why not? It didn’t do us any harm.

T 9.4
1 A You don’t like your new teacher, do you?
В Not a lot, but we’re getting used to her.
2 A How can you get up at five o’clock in the morning?
В No problem. I’m used to it.
3 A How come you know Madrid so well?
В I used to live there.
4 A How are you finding your new job?
В Difficult, but I’m getting used to it bit by bit.
5 A Do you read comics?
В I used to when I was young, but not any more.
6 A You two argue so much. How can you live together?
В After 20 years’ marriage were used to each other.

A teacher to remember