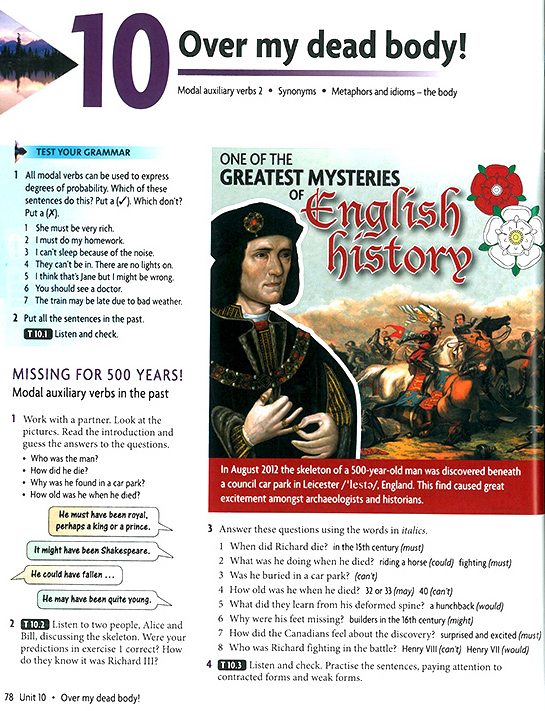 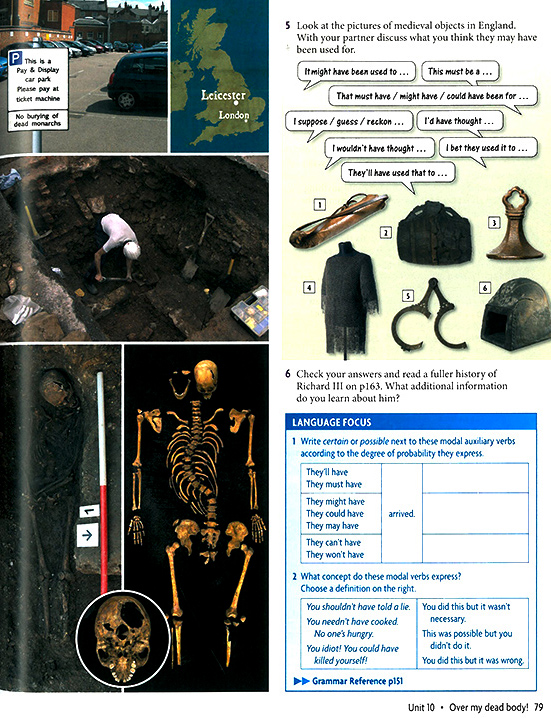 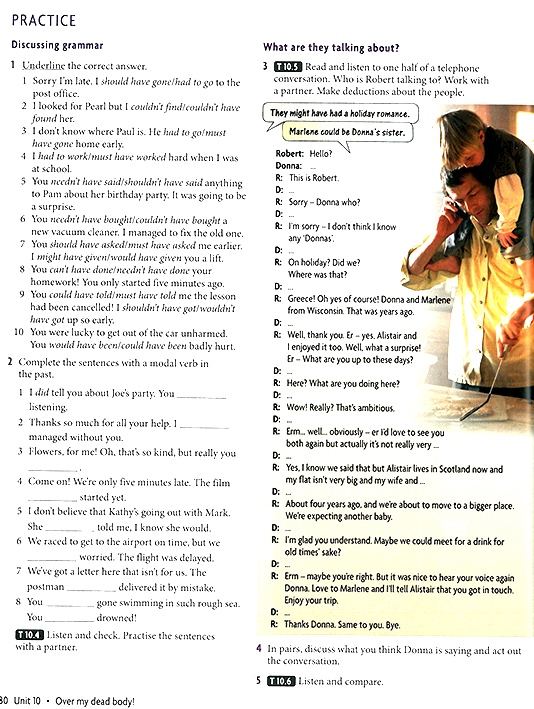 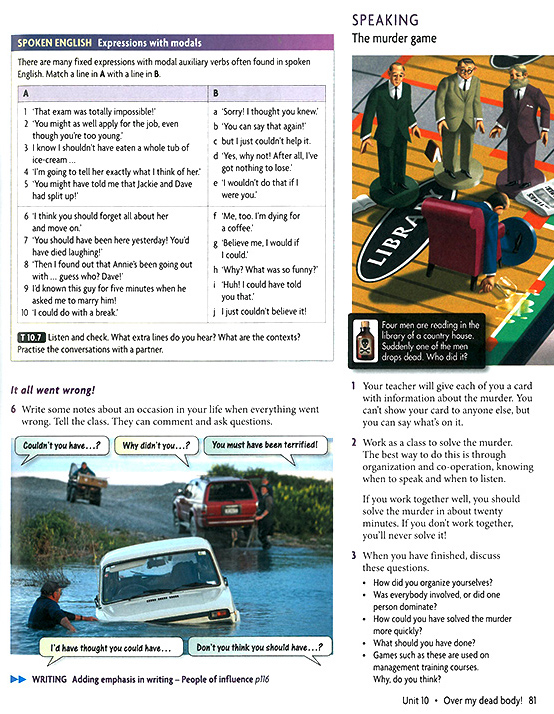 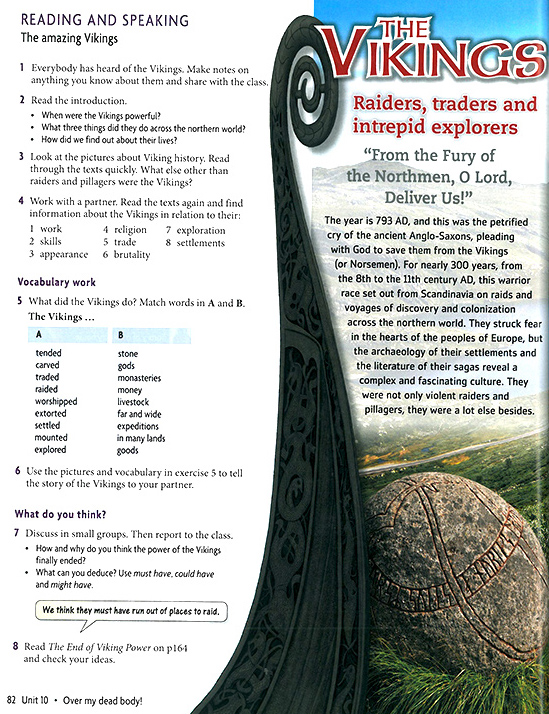 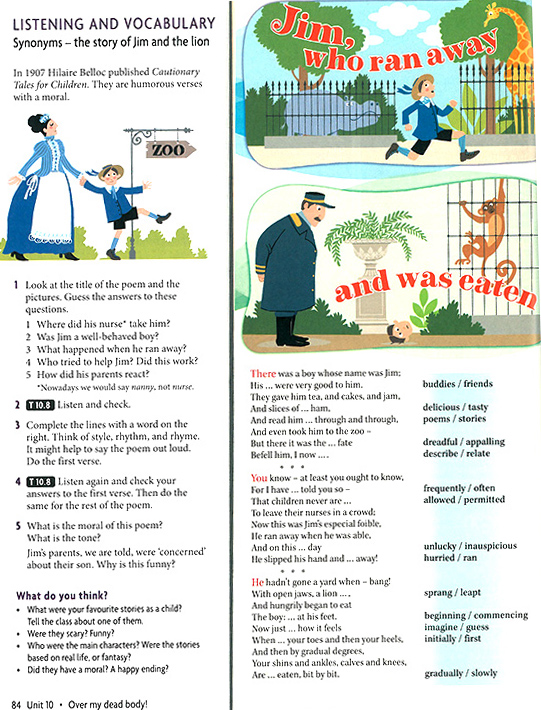 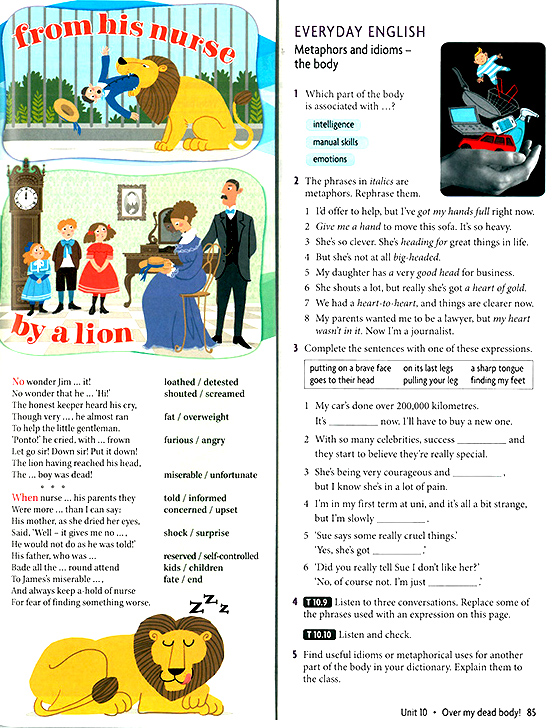 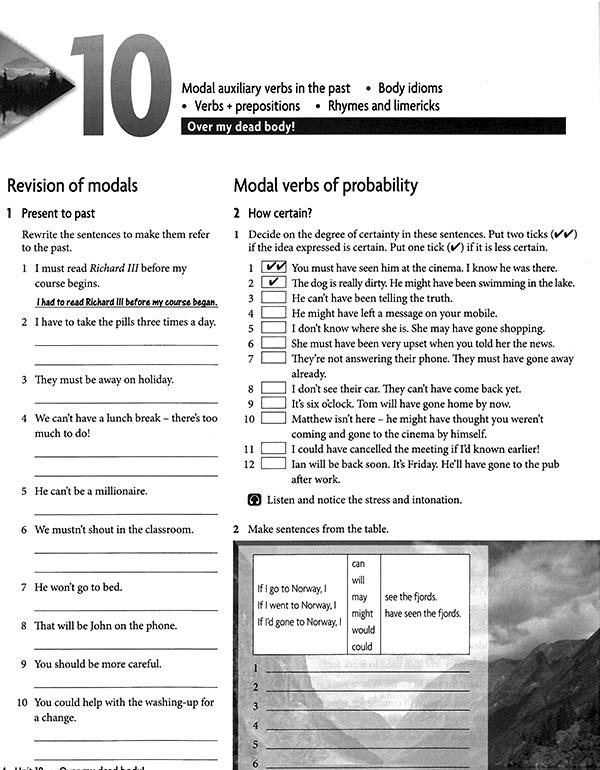 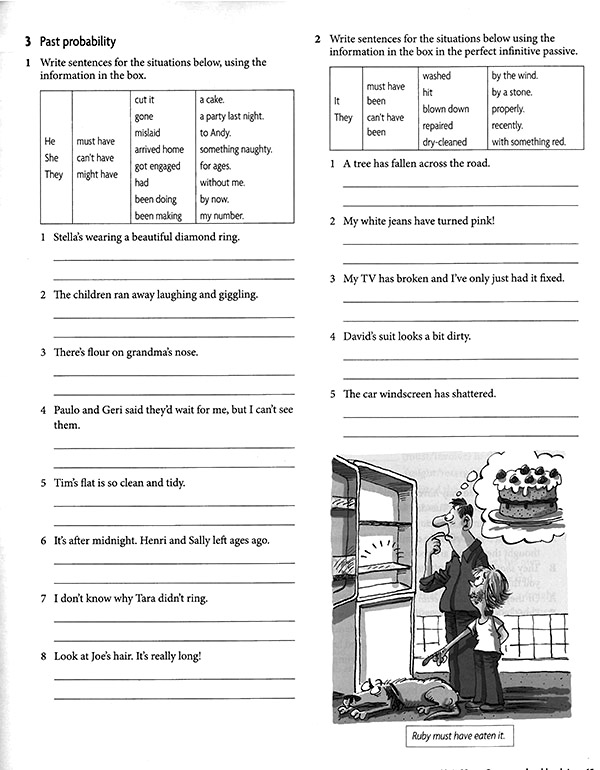 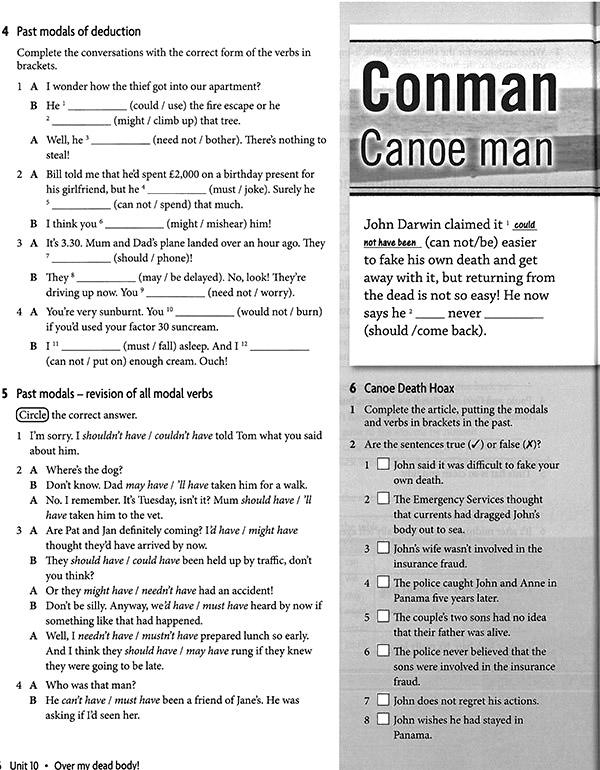 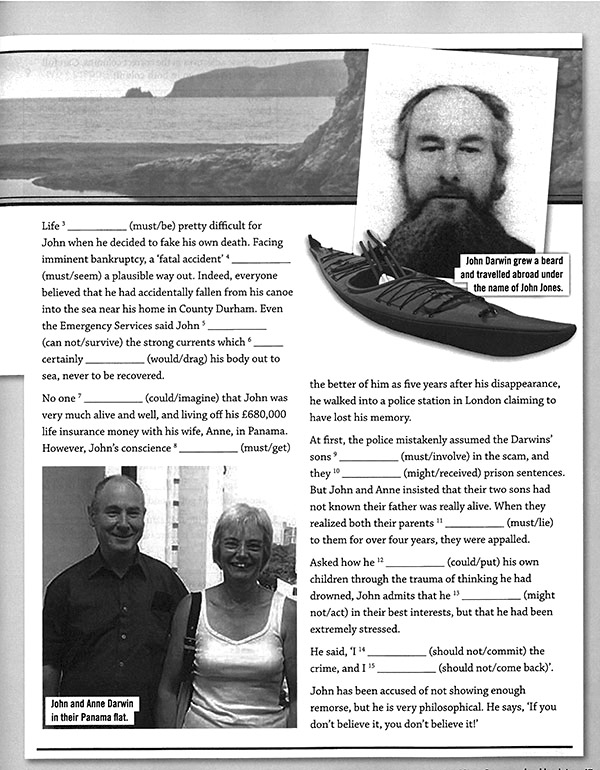 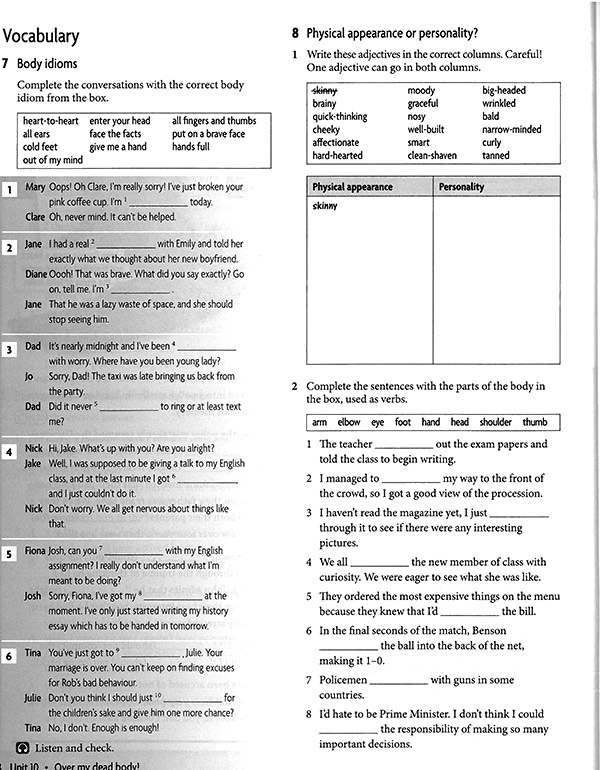 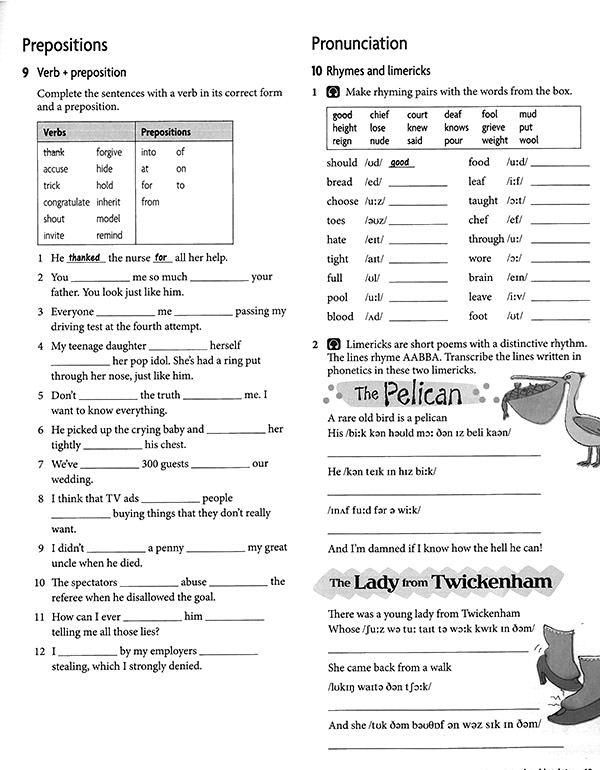 T10.1
1 She must have been very rich.
2 I had to do my homework.
3 I couldn’t sleep because of the noise.
4 They can’t have been in. There were no lights on.
5 I thought that was Jane but I might have been wrong.
6 You should have seen a doctor.
7 The train may have been late due to bad weather.

T10.2
The king in the car park
A How was the theatre last night? What did you see?
В We saw a Shakespeare - Richard III. It was fantastic! Fabulous acting. You know: ‘A horse, a horse my kingdom for .,.’
A You saw Richard III! Do you know he’s all over the news at the moment?
В Why? He died over 500 years ago.
A Yeah, and nobody knows where he was buried. It’s a big mystery - at least it was a mystery because now they’re pretty sure they’ve found his body,
В Really?
A Well not his body exactly - his skeleton. It was beneath a car park in Leicester.
В Beneath a car park? You’re kidding me. So King Richard could have died while parking his horse!
A Ha ha! Not funny! No, seriously, they say the car park must have been built on what was once a church graveyard.
В But how do they know the skeleton is Richard III?
A Well, they know he was killed in 1485 in a battle near Leicester.
В Yeah, the Battle of Bosworth Field.
A Yeah, that’s right - and tests showed that the man must have died around that time from battle wounds and that he was in his        late 20s or 30s and ...
В Yeah, I think Richard was in his early 30s when he died.
A Also, the skeleton has a deformed spine so he would have been a hunchback.
В Yes, and Richard was a hunchback. Well, at least he was in Shakespeare’s play.
A They can tell a lot from the skeleton and it’s in really good condition, except that the feet are missing.
В How come the feet are missing?
A Oh they say builders might have chopped them off in the 16th century. Anyway, the archaeologists found some people in Canada who are descendants and they’ve done DNA tests which match.
В I bet those people were surprised.
A Yeah, I bet.
В Who was Richard fighting in the battle? Was it Henry VIII?
A No, it can’t have been Henry VIII. I don’t think he was born until the end of the 15th century
- it must have been his father, Henry VII. My history’s a bit rusty.
В I think you’re right. It would have been Henry VII. There’ve been a lot of Henrys, haven’t there?
A Yeah, but none since Henry VIII. Who knows
- there might be a Henry IX one day.

T 10.4
1 I did tell you about Joe’s party. You can’t have been listening.
2 Thanks so much for all your help. I couldn’t have managed without you.
3 Flowers, for me! That’s so kind, but really you shouldn’t have.
4 Come on! Were only five minutes late. The film won’t have started yet.
5 I don’t believe that Kathy’s going out with Mark. She’d have told me, I know she would.
6 We raced to get to the airport on time, but we needn’t have worried. The flight was delayed.
7 We’ve got a letter here that isn’t for us. The postman must have delivered it by mistake.
8 You shouldn’t have gone swimming in such rough sea. You could have drowned!

T10.6
R Hello?
D Hi, can I speak to Robert Johnson, please?
R This is Robert.
D Hi, Bob! It’s me, Donna.
R Sorry - Donna who?
D Donna Goldberg.
R I’m sorry - I don’t think I know any ‘Donnas’.
D You do, you do! We met on vacation - or ‘holiday’ as you say.
R On holiday? Did we? Where was that?
D In Greece. Me and my friend Marlene were staying in the same hotel.
R Greece! Oh yes of course! Donna and Marlene from Wisconsin. That was years ago.
D It was nearly ten years ago but Marlene and I still talk about it. We had a great time didn’t we? You and your friend Alistair were such great guys.
R Well, thank you. Er- yes, Alistair and I enjoyed it too. Well, what a surprise! Er- What are you up to these days?
D Well, I’m here in London at the moment.
R Here? What are you doing here?
D Well, Marlene and I are on holiday together again and this time we’re going round Europe
- six countries.
R Wow! Really? That's ambitious.
D Yeah and we’re beginning here in England so we wondered if we could come and visit. Maybe stay a couple of nights? It’d be great to catch up.
R Erm ... well ... obviously er I’d love to see you both again but actually it’s not really very ...
D But you said we could visit if we were ever in London - and here we are!
R Yes, I know we said that but Alistair lives in Scotland now and my flat isn’t very big and my wife and ...
D Bobby are you married now? That’s so cool. When did you marry?
R About four years ago, and we’re about to move to a bigger place. We’re expecting another baby.
D Bob, I see, no worries. Marlene and I understand, new baby, new home.
R I’m glad you understand. Maybe we could meet for a drink for old times’ sake?
D I’m not sure your wife would be too pleased.
R Erm - maybe you’re right. But it was nice to hear your voice again Donna. Love to Marlene and I’ll tell Alistair that you got in touch. Enjoy your trip.
D Thank you Robert. Have a nice life.
R Thanks Donna. Same to you. Bye.

T 10.7
1 A That exam was totally impossible!
В You can say that again! I couldn’t answer a single question. I’m bound to have failed.
2 A You might as well apply for the job, even
though you’re too young.
В Yes, why not! After all, I’ve got nothing to lose. You never know, I might be just the person they’re looking for.
3 I know I shouldn’t have eaten a whole tub of ice-cream but I just couldn’t help it. I feel as fat as a pig now.
4 A I’m going to tell her exactly what I think of
her.
В I wouldn’t do that if I were you. You’ve no idea how she’ll react. It could get really nasty.
5 A You might have told me that Jackie and
Dave had split up! I felt really stupid when I asked Jackie where they were going on holiday.
В Sorry! I thought you knew. Everybody else does.
6 A I think you should forget all about her and
move on.
В Believe me, I would if I could. But I just can’t get her out of my mind. 1 think it must be love.
A Oh no!
7 A You should have been here yesterday! You’d
have died laughing!
В Why? What was so funny?
A Well, Pedro was imitating the teacher, and he was so good, and then the teacher walked in!
8 A Then I found out that Annies been going
out with ... guess who? Dave!
В Huh! I could have told you that. It’s common knowledge. Where have you been?
9 I’d known this guy for five minutes when he asked me to marry him! I just couldn’t believe it! Maybe he does the same to every girl he meets.
10 A I could do with a break.
В Me, too. I’m dying for a coffee. It feels like this lesson’s been going on for ages.

T 10.8
Jim, who ran away from his nurse, and was eaten by a lion
There was a boy whose name was Jim;
His friends were very good to him.
They gave him tea, and cakes, and jam,
And slices of delicious ham,
And read him stories through and through, And even took him to the zoo - But there it was the dreadful fate Befell him, I now relate.
You know - at least you ought to know,
For I have often told you so - That children never are allowed To leave their nurses in a crowd;
Now this was Jim’s especial foible,
He ran away when he was able,
And on this inauspicious day He slipped his hand and ran away!
He hadn’t gone a yard when - bang!
With open jaws, a lion sprang,?
And hungrily began to eat The boy: beginning at his feet.
Now just imagine how it feels
When first your toes and then your heels,
And then by gradual degrees,
Your shins and ankles, calves and knees, Are slowly eaten, bit by bit.
No wonder Jim detested it!
No wonder that he shouted ‘Hi!’
The honest keeper heard his cry,
Though very fat, he almost ran To help the little gentleman ‘Ponto!’ he cried, with angry frown ‘Let go, sir! Down, sir! Put it down!’
The lion having reached his head The miserable boy was dead!
When nurse informed his parents they Were more concerned than I can say - His mother, as she dried her eyes,
Said, ‘Well - it gives me no surprise,
He would not do as he was told!’
His father, who was self-controlled Bade all the children round attend To James’s miserable end,
And always keep а-hold of nurse For fear of finding something worse.

T10.9
How’s the new job?
OK, but I’m still getting used to it. My boss seemed very strict at first, but underneath it all she’s very kind and generous. She understands the retail business very well, so she knows what she’s doing.
Can you help me to fix my computer? I can’t open any of my files.
Listen, you’d better accept the fact that your computer is ancient. It’s been about to stop working for years. You can get a new one for about ?500 these days.
Are you joking?
No, I’m perfectly serious.
Pat’s been unbearable lately. That promotion has made her feel more important than she is. She’s been shouting at everyone. She’s always spoken in a harsh and unkind way, but now she’s upsetting everyone.
I know. I’ll have to talk to her honestly and openly.

T 10.10
How’s the new job?
OK, but I’m still finding my feet. My boss seemed very strict at first, but underneath it all she’s got a heart of gold. She has a very good head for the retail business, so she knows what she’s doing.
Can you give me a hand to fix my computer? I can’t open any of my files. Listen, you’d better face the fact that your computer is ancient. It’s been on its last legs for years. You can get a new one for about ?500 these days.
Are you pulling my leg?
No, I’m perfectly serious.
Pat’s been unbearable lately. That promotion has gone to her head. She’s been shouting at everyone. She’s always had a sharp tongue, but now she’s upsetting everyone.
I know. I’ll have to have a heart-to-heart talk with her.